N.V. Nederlandse Gasunie achieved solid results in 2013. Net profit amounted to € 464 million over 2013, with an invested capital of € 9,161 million. Gasunie’s sole shareholder, the Dutch State, will receive a dividend of € 325 million, for the benefit of Dutch society.

Investments and maintenance
Investment expenses in 2013 amounted to € 659 million. In 2013, the expansion of the underground gas storage in Zuidwending and the construction of the German NEL pipeline between the Nord Stream pipeline and our German network were completed successfully. In the context of a multiple-year replacement program, a start was made on the preventive replacement and the renovation of the first ageing parts of the Dutch gas network. In 2014 and 2015, the new pipeline between Beverwijk and Wijngaarden and the new pipeline and compressor stations in north Germany, intended to increase the cross-border capacity towards Denmark, will be completed. This provides for the market demand for extra capacity in these parts of Europe.

Safety for society and staff forms the cornerstone of Gasunie’s activities. The expansion activities on the network in the Netherlands sadly led to an accident in November, in which an employee of one of our contractors died. Gasunie very much regrets this incident and, together with the parties involved, is taking measures to prevent similar accidents in the future.

Revenues and operating result
Compared to last year, Gasunie saw its realised revenues increase by € 21 million to € 1,527 million. This increase is mainly due to the extra revenues generated by new infrastructure projects. Decreasing revenues resulting from the efficiency discounts on the tariffs as determined by the regulators in the Netherlands and Germany could therefore be compensated. The normalised operating result (EBIT) in 2013 was approximately € 50 million higher than in 2012. Due to the cold first half of the year, energy costs came out higher. The increase in reported EBIT is to an important degree due to a one-off benefit in 2013, i.e., the release of the pension provision in the Netherlands. 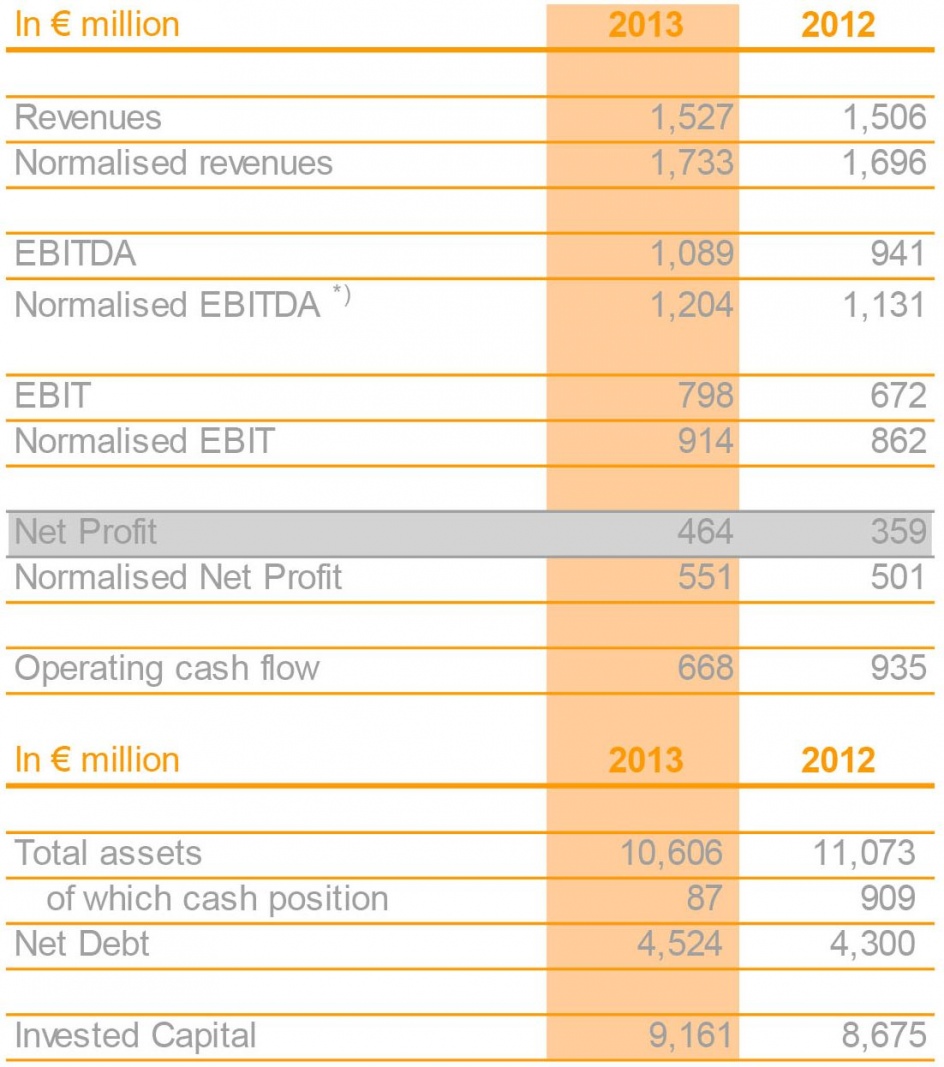 *) Adjusted for the effects on revenues of the method decisions 2010-2013, release of a part of the pension provision in 2013, and a one-off compensation received by Gasunie Deutschland in 2012.

Forecast
On the basis of current insights, for 2014, Gasunie is expecting an increase in the results after taxes from regular operational activities. Revenues will increase because the pay-back obligation relating to the past method decisions of GTS expired after 2013. In addition, the efficiency discounts, as determined by the regulators in the Netherlands and Germany, will be compensated by revenues from new assets. Operating expenses are expected to increase due to rising maintenance costs for the network.